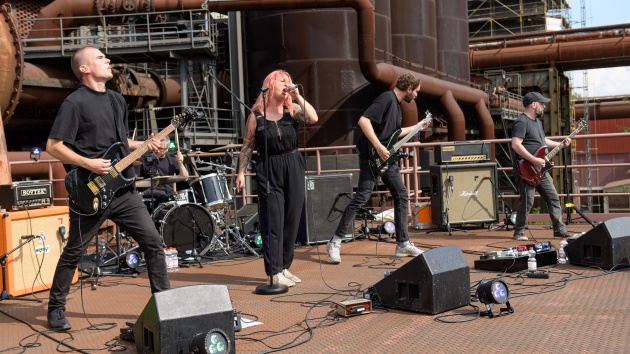 Hamburg- based sludge metal act, HIGH FIGHTER, has announced the release of their first live album. Soon after their second album, the critically acclaimed Champain in 2019, the band was forced to stop promoting the record live due to obvious reasons, when they got invited by German TV and iconic live format WDR Rockpalast to be part of a special Offstage– series. High Fighter Live at WDR Rockpalast will be released on November 26, 2021, available as a strictly limited Vinyl edition and as Digital formats, through Italy’s powerhouse label Argonauta Records.

Filmed in August 2020 at an industrial, breathtaking setting of the Landschaftspark Duisburg- Nord, Germany, HIGH FIGHTER’s only show since the beginning of the pandemic; under strict Covid- rules and without a crowd, was aired on TV and is available to stream online here. The live album was recorded by Dominik Schenke with a pre- mix by Christoph Scheidel at 79 Sound Studio, while Jan Oberg (Earth Ship / Grin) added the final mix and mastering at Hidden Planet Studio in Berlin.

With their vibrant blend of sludge metal, doom and stoner blues- core, HIGH FIGHTER‘s Live at WDR Rockpalast will feature a heavy set and collection of songs taken from the band’s first 3 records: The rough and raw, 2014- debut EP The Goat Ritual, their first full- length album Scars & Crosses (2016, Svart Records), and the latest, fast- paced and brutal sludge juggernaut Champain, released in 2019 on Argonauta Records. HIGH FIGHTER have just shared a teaser, check it out here:

“It was obvious both for High Fighter and me to give a prosecution to the stellar album Champain, which received so much great feedback across the board,“ says Gero Lucisano, owner of Argonauta Records. “We spoke of various options we had on the table, if it was appropriate to be again on the market with any special release before any new album. It was totally crazy, that a worldwide pandemic completely disoriented the whole market at all levels. Thankfully, a very fine chance has been proposed us when checking the killer set the band played at WDR Rockpalast. An impressive show full of energy, impressive executions followed by top recordings. And we are now proud to officially announce this beast!”

“This show was special yet kind of surreal for us,” HIGH FIGHTER vocalist Mona Miluski adds. “We never played such a location before — and especially no show like in such dark times and under circumstances like these. The production and whole WDR team was a top- notch professional, and we just felt lucky to finally play live at least for the moment and that session. We’re still stoked for the opportunity WDR TV gave an underground band like us to be a part of this concert series. But most important and special for us, it’s been the last show we have played with our former guitarist and dear friend, Shi, who decided to leave the band a few months later. This album is kind of dedicated to him and us as a five- piece band, from now on you won’t get to see High Fighter in this line- up again. We will continue as the four of us, and we are heavily working on many new songs and sound for our third album, but meanwhile, we hope you enjoy this little live affair!“

Slated for a release on November 26, 2021 with Argonauta Records, the pre- sale of this limited live LP will follow soon.