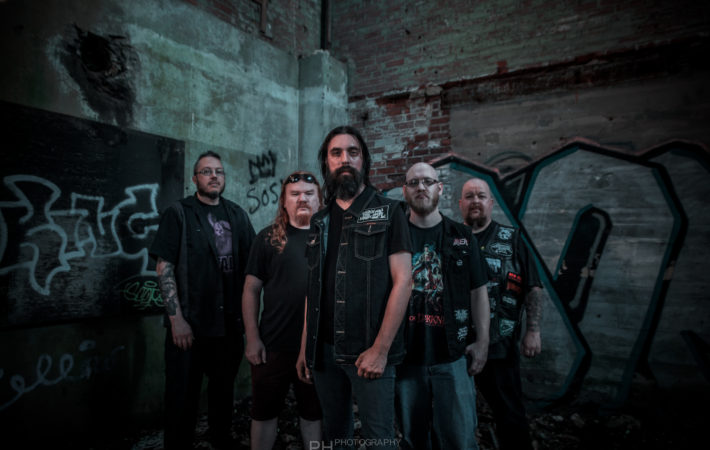 US heavy doomsters MOURN THE LIGHT have inked a worldwide record deal with Italy’s powerhouse label Argonauta Records, who will proudly release the band’s first full-length album during 2021.

MOURN THE LIGHT was formed in early 2018 by Dwayne Eldredge, co-founder of The New England Stoner and Doom Festival. Driven by his passion for thunderous, traditional doom metal mixed with lofty progressive metal leanings, Dwayne was hell-bent on creating a band that could sonically push a message of hope in spite of despair.

Following on their highly acclaimed 2019- debut EP, touring the US and Canada including festival appearances at Stoner Jam 19 (during SXSW) or the second New England Stoner and Doom Festival, MOURN THE LIGHT returned to the studio to record their first album. Entitled Suffer, Then We’re Gone, the band’s debut album has a plethora of influences showcased, yet made all their own. At one moment, MOURN THE LIGHT delivers crushingly massive riffs, only to jump at the next turn, galloping along with shades of classic power metal taking hold and leading the way — all the while focused on incredibly memorable songs, with catchy hooks and sing-along choruses.

Watch a first teaser and get a glimpse of what to expect from MOURN THE LIGHT’s upcoming debut, here:

Suffer, Then We’re Gone features nine epic yet heavy as hell tracks, recorded by Dave Kaminsky at Studio Wormwood, and will most likely see MOURN THE LIGHT step out as one of North America’s best kept underground secrets, showing no signs of slowing down anytime soon…

“Our debut album “Suffer, Then We’re Gone” is the culmination of hard work and determination to create something meaningful and special to us.” Says guitarist Dwayne Eldredge. “We have grown as a band so much over the last couple years and we think it really shows in our latest work. We are a metal family working together on our heavy metal legacy and we are proud to be working with Gero and Argonauta Records.  We can’t wait to see what the future holds. Looking forward to getting out on the stage again soon….”

So better buckle up, take a ride with MOURN THE LIGHT, and stay tuned for many more album details to be revealed in the weeks ahead!