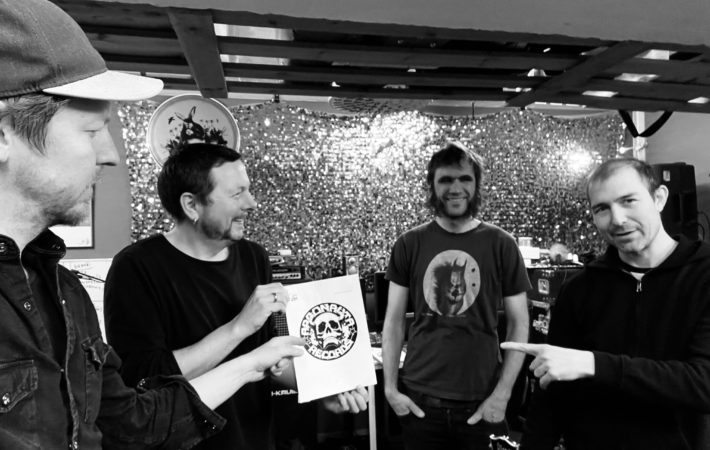 Norwegian prog- and psychedelic  punk rockers POLYFRENETICS have inked a deal with Argonauta Records for the release of their upcoming debut EP, set to be unleashed this summer!

POLYFRENETICS were formed in Oslo in late 2007 by guitarist Are Linnerud and Per Erik Sæter (bass/voc.). Both were playing in several bands together on and off since the mid nineties, but never quite found their space, place or peers in other bands. Until they started to make their own psychedelic brew of brutal progressive rock with their punk infested hearts that things started to happen and POLYFRENETICS was born.

Following numerous high-voltage shows over Norway, intense jams and hours of unfinished recordings due to several line-up changes, POLYFRENETICS eventually put the final touches to their blistering debut. Four vibrant and heavy as hell tracks showcasing a fierce blend of prog- rock and proto-punk, guarded by psychedelic vibes and a gritty punk attitude. It may have taken some time for POLYFRENETICS to finally revive from the ashes of their past, but one is sure, with their revitalizing sound they are a band you need to watch out for in 2021!

“We are utterly baffeled and completly gobsmacked to announce that the Italian powerhouse label Argonauta Records are releasing our debut EP on vinyl this summer! When Gero at Argonauta Records reached out and asked us to join their eclectic roster we were stoked, humble and 100% down with it! ” The band comments.

“POLYFRENETICS debut EP is a mash-up of the bandmembers dark past in prog rock, their love of punk, all that’s heavy and some really, really weird-ass psychedelic flashbacks.

Be forewarned for the hard rock, psychedelic, proto-, prog-, punk outfit that is POLYFRENETICS.”

POLYFRENETICS debut EP will be coming out this summer on Argonauta, stay tuned for more updates and album tunes to follow in the weeks ahead!