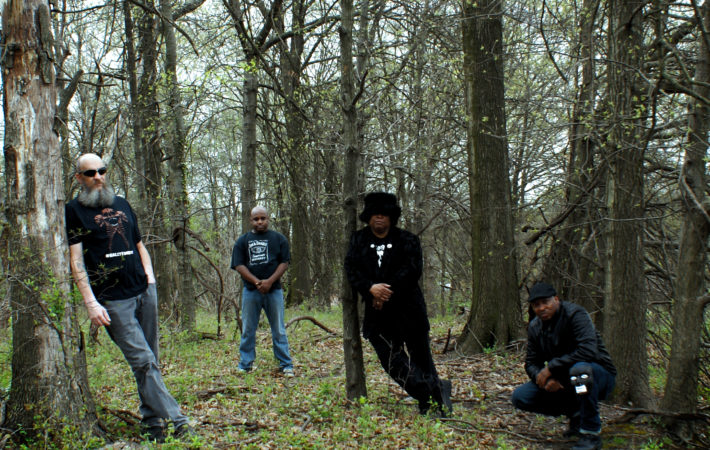 Doom metal heavyweights MANGOG have announced the surprising release of a brand new EP titled The Ghost in the Room, which is out now on Argonauta Records!

MANGOG is a doom metal band based out of Baltimore, Maryland, formed by bassist Bert Hall Jr. (Revelation, Against Nature, Beelzefuzz ), assuming guitar duties, drummer Stephen Branagan (Revelation, Against Nature, and Yet So Far), Major Company bassist Darby Cox, and Final Answer vocalist Myke Wells. In early 2015 the band released the Daydreams Within Nightmares EP during their debut performance at the Maryland Doomfest. One year later, MANGOG completed its first and critically acclaimed full length album, Mangog Awakens, released with Argonauta Records in 2017.

The Ghost in the Room continues the band’s work and sets high anticipation for their sophomore album, MANGOG are currently working on. Their brand new, 2-track EP is now available for streaming and download here:

“We are stoked to give everyone a taste of some of the music we’ve been working on through our partnership with Argonauta Records!” MANGOG comments. “The Ghost in the Room has been a staple of Mangog set lists since shortly after the release of the “Awakens” album, with the track “Hubris” being written much more recently.

The road to getting out new music has been an epic one, paved with hospitalizations, birth, death, setbacks, frustration and lineup changes. These recordings feature former member Dao Yu on drums, who worked with the band between September 2017 and October 2018.

We recently also begun to perform acoustic versions of some of our new and old songs, and will have a video for “Ghost in the Room” about to enter the post production, so better watch out for many more great news to come soon!”