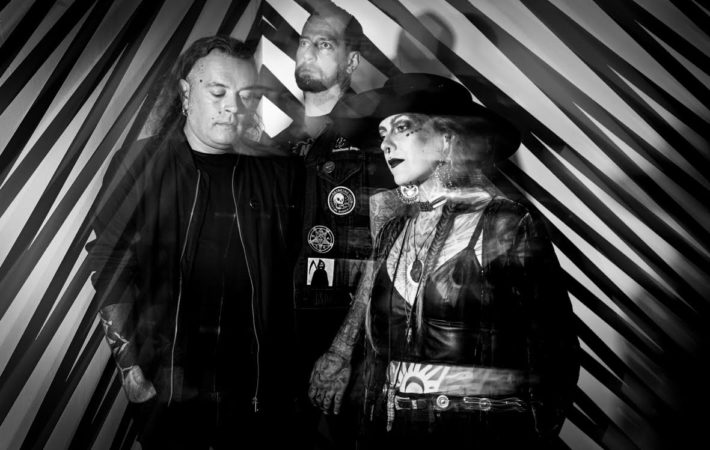 Formed in 2019 by creative duo Julie Docteur and Benoît Sangoï, and following their critically acclaimed 2020- debut EP, INDIGO RAVEN welcomed a third band member to round up their line-up, bassist Jean Green (also in MOURIR). The trio’s sound emerges from the Peaceville Three’s influence with a modern sludge approach. A simple but not unsophisticated instrumental foundation of the band, coloured by a shamanic sound and these occult, haunting vocals, make Looking for Transcendence a captivating yet heavy as hell debut, that will most likely see INDIGO RAVEN stand out as one of Europe’s underground best and up- and coming bands. But give ear, after INDIGO RAVEN just recently shared a first song, the thrilling cover version of MAZZY STAR’s ‘Into Dust’ (Listen HERE!), today they released their highly anticipated album available now on all digital platforms.

Excited to have had the chance to run a nice interview with the band, check below and enjoy!

1. Hi guys, you were born on 2019 and your debut EP on 2020 was critically acclaimed . Tell
us more about you before meeting Argonauta Records.

Ben : Recording the EP was a bit of a test to see how Julie’s voice could work with the titles I
wrote. After releasing it on Bandcamp, we decided to look for labels and work on our first
album. Amongst all the feedback, we received Argonauta Records’ offer which seemed the
most relevant. Our music fits well with the rest of their roster and most of all, Gero showed
us reliability and enthusiasm from the very beginning.
Jean’s arrival in the band occurred simultaneously as the signing with Argonauta, so we
recorded « Into Dust », our Mazzy Star cover, to celebrate all that.

Jean : Hi there. I’m the new guy who is really happy about making music with these two. Being able to work
with you guys at Argonauta is a nice conclusion to a year which has been weird but
somewhat rich in the sense that the world having been put on hold enabled us to achieve
this new LP. The place I work had to shut so I could easily sneak out and hang out with them
to record during lockdowns.
Julie and I work in the tattoo world so we met a few years back , she’s a person I’ve always
loved since day one, we have things in common musically and her spiritual world is powerful
enough to raise questions she’s always eager to answer to even I’m a total noob .
Meeting Ben who’s been around for quite some time now not so long ago has been some
kind of love at first sight kind of shit so to speak, we share a shitload of musical influences.
Being asked to put my clumsy dirty hands in the project has been a total win/win for me, my
ideas have been welcomed right away and it felt good to do something different.

2. Your full length “Looking for Transcendence” will be released on October 2021, what we
have to expect from it? Something different from the EP? What about the writing process
with new line up?

Ben : « Looking for Transcendence » really is a milestone. As I mentioned earlier, the EP
allowed us to befriend each other and the album is more of a statement.
I personally don’t expect anything specific from music, I just want to create some music I
love with people I love.
When Jean arrived, the main framework of the titles was already recorded, but the collective
emulation created allowed us to enhance and make every draft more consistent. Jean and I
have the same musical background, we speak the same language, we don’t even have to
speak to know what will sound or not.

Jean : When I joined the project Ben had written most of the songs. My job has been to
share ideas and sticking to my old dirty sound habits, I’m punk rock born and raised with a
solid trash/black/grind/death background. It clicked right away and we’ve able to record quite
easily tracks on which Julie could lie down her universe.

Julie : I agree with Ben, the album is more of the foundation of what we discovered from
each other, after learning how to work together. It may be gloomier, a bit more mature and
more cinematographic than the EP. Jean brought an incredible energy to push us to explore
different territories, he really made a difference in the way we work.

3. Considering this strange period, were you able to organize a release show and/or any
gigs later to promote your brand new album?

Ben : We’ll probably play a few shows to promote the album, but we’ll have to be a bit
patient because for now Julie‘s abroad and Jean’s very busy with his two,other bands. But
we’re looking forward to it. Anyways, I don’t think we’ll be able to tour intensively at some
point.

Julie : We’ll start rehearsal plans when I come back in a few weeks and see how to play a
few gigs.