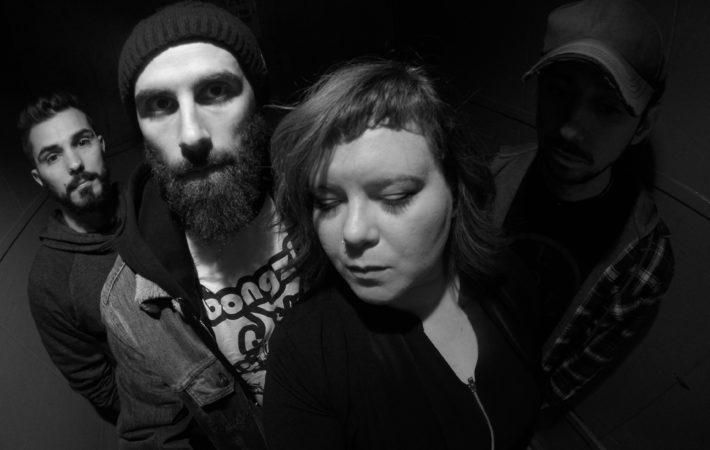 Formerly known under the flag of MY HOME ON TREES, the well-respected Stoner Doom band hailing from Milano, Italy, just recently announced the change of their band name into BURNING GLOOM and the worldwide signing with powerhouse label Argonauta Records. 2019 will see them celebrating their comeback with a new shining identity and sound, leaving behind the past and release their brand new album titled Amygdala on June 14th, which will definitely surprise and please both fans and critics alike!

As the band explained earlier: “Mystic trees and stoner blues didnʼt represent us anymore, after the first abum we started to look for darker atmospheres and heavier sounds; we decided to not continue with two guitars, but to have just one and we felt closer to doom metal and far enough from any psychedelic rock and blues appeals we had before. A different mood, more melancholic, more and louder screaming voices. All this became the new attitude, closer to doom and sludge metal and quite distant from usual stoner rock:“

“We realized that we wanted a guest doing vocals, as we did before with Steve Moss from The Midnight Ghost Train for our last album, and “Nightmares” was the most appropriate track of the record to host a feature and perfect for what we needed, a female voice, but a “metal” one. We decided to ask Mona Miluski of the band High Fighter and she accepted. We asked her for a violent screamo and she gave her own sludge and black influence to the chorus and final part of the track. We are very satisfied, the experiment worked out perfectly, since we also wanted to move away from the usual stoner, feeling closer to doom and sludge metal nowadays.
About the lyrics, we have this person that has to face the dark and evil side of a sick mind, facing the deepest nightmares and not being able to truly seeing and accepting the own way to be.
A worried soul, threatened by human fragility, escaping from herself. The video was directed by an artist who we all admire very much and who became a good friend, Simon Gallo. We already have worked together before and we were very happy about it, we didn’t want to change this winning team. It’s a very sick video, about fears and anguishes, in black and white and in this spectral location. We’re very enthusiastic of these two collaborations, with Mona and with Simon, everything worked out exactly as we wanted.”

BURNING GLOOM started their first moves in 2011 under the name MY HOME ON TREES, but it’s in 2012 when the band dives into any live activities and understood quickly which road had to be taken, playing the first shows and looking for the right sound. After the release of a first self-produced EP featuring 5 tracks in 2012, the band played tons of shows in Italy and signed with Heavy Psych Sounds Records in 2015, who released their first and critically acclaimed album, How I Reached Home.

The band continued as a four piece, and toured Europe several times, sharing prestigious stages with bands alike Church of Misery, Ufomammut, Karma to Burn, Windhand, and appeared at international festivals such as at Up In Smoke or Red Smoke to name just a few. After three years working on new tracks, BURNING GLOOM entered the studio and recorded their new album, Amygdala, between February and June 2018, which will be coming out on CD, Vinyl and Digital formats June 14th 2019 with Argonauta Records!