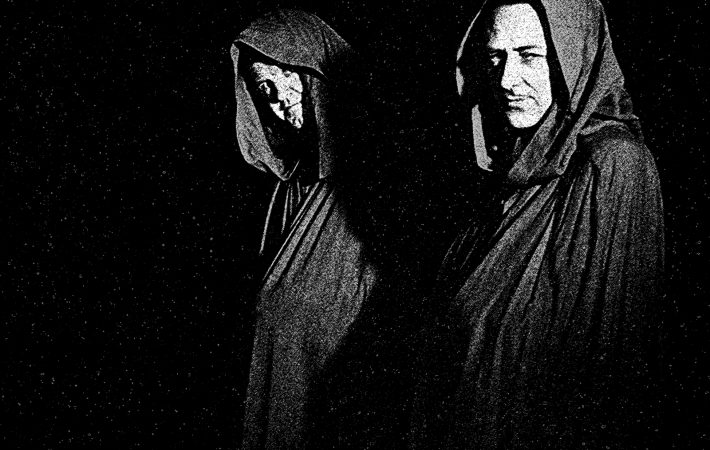 Their sound pummels, you feel it in your guts. It disturbs your mind but gives you the chills to the same time. It’s the apocalypse and pure perfection of all that is heavy: Noise Doom duo BIBLE BLACK TYRANT, featuring masterminds Aaron D.C. Edge and Tyler Smith – renowned members of bands such as Eagle Twin, Lumbar, Ramprasad, Form of Rocket, Minor Fret, Canyon of the Crescent Moon and Hellvetika – returns with their sophomore album, Encased in Iron, on February 28th 2020 with Argonauta Records! Following their highly acclaimed, 2018-debut album, Regret Beyond Death, today the heavy music veterans have revealed the hotly anticipated details of their second, full-length album, and unleashed a first single!

“‘Encased in Iron’, Bible Black Tyrant’s second release, focuses on the torture that is human existence.” Aaron Edge comments. “A black curse, whispered perverse by loved ones that spit on us. Tasting bile, and the salt of our own tears in this vault. Savoring our own severed tongues. Trying to utter sounds while boiling. Do you know how you taste while trapped and locked in a box? As the steel heats, bravery is replaced with fear. Life in the iron cage, with little air to breathe, starving. We are mistreated and then forgotten; that is the human experience.”

BIBLE BLACK TYRANT’s upcoming album was recorded by Aaron Edge at Myelin Studio, while the drums were documented and mixed by Andy Patterson at The Boar’s Nest. With a final mix and mastering by Eric Leavell at Husk Recording, the pre-sale for Encased in Iron – available on LP, CD and Digital formats February 28th 2020 – has just begun via the Argonauta Records store at THIS LOCATION. Highly recommended for fans of Iron Monkey, Eyehategod, Cursed, Indian, Keelhaul, and Cavity!