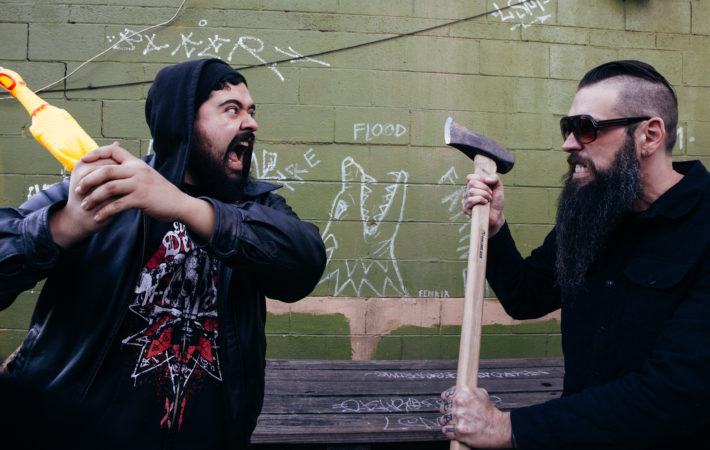 MONTE LUNA is the experience for the experienced spirits, reaching deep into your soul with a sledge of the heavy as hell doom sounds. After their critically acclaimed debut album self-released in 2017, the Austin-based duo and brainchild of James Cl and Philip Hook have signed a worldwide deal with Argonauta Records, who re-released MONTE LUNA’s debut on Vinyl this summer and who are set to release the band’s sophomore album during 2019!

Currently in the Matador Studios in San Antonio Texas, the band has now checked back with some update! “Hello everyone! James and Phil here from the Studio! The album is coming along smoothly! We have been able to record all of the album tracks, in addition to that, we have recorded 3 songs that will not be featured on the album! What we will do with those songs is unclear at this time. Once we have the album mixed we will be sending it off to Chris Fielding at Skyhammer Studios for Mastering. We could not be more excited to show you all the new music! It is not going to be the same album as our self titled, some things have changed, but at its core it is still Monte Luna. Much love to you all! We can’t wait to give you some new music!”

Visit the band in the studio and check out some video message from James right here:

Known for their interminable doom tracks, although the new album songs may be shorter than usual and the record will mark a change for the band, MONTE LUNA will keep leading you into another dimension and a challenging trip to fill your musical voids, and are hard at work to deliver their strongest work to date. Recommended for fans of Yob, Conan, Cough among many more heavyweights of the doom, the album release date alongside cover art work and some first tunes will be unleashed over the next upcoming months. Stay tuned for many more news as well as extensive tour plans by the band to be unveiled soon!